Camp Nou meaning new field, often referred to in English as the “Nou Camp”) is the home stadium of FC Barcelona since its completion in 1957. With a seating capacity of 99,354, it is the largest stadium in Spain and Europe, and the third largest football stadium in the world in capacity. It has hosted two European Cup/Champions League finals in 1989 and 1999, two UEFA Cup Winners’ Cup finals, four Inter-Cities Fairs Cup final games, five UEFA Super Cup final games, four Copa del Rey finals, two Copa de la Liga final games, twenty-one Supercopa de España final games, five matches including the opening game of the 1982 FIFA World Cup, two out of four matches at the 1964 European Nations’ Cup and the football competition final at the 1992 Summer Olympics.

The construction of Camp Nou started on 28 March 1954 as Barcelona’s previous stadium, Camp de Les Corts, had no room for expansion. Although originally planned to be called the Estadi del FC Barcelona, the more popular name “Camp Nou” won. The June 1950 signing of László Kubala, regarded as one of Barcelona’s greatest players, provided further impetus to the construction of a larger stadium. The architects were Francesc Mitjans and Josep Soteras, with the collaboration of Lorenzo García-Barbón.

In May 1972, Camp Nou hosted its first European Cup Winners’ Cup final between Rangers and Dynamo Moscow. Rangers won the match with a score of 3–2. The 1970s marked a turning point for Barcelona with the signing of a new player, Johan Cruyff, in 1973. Electronic scoreboards were installed in the stadium two years later.

The stadium underwent an expansion in 1980, in anticipation of the 1982 FIFA World Cup, which added boxes, VIP lounges, a new press area, new markers and the construction of the third tier, which was smaller in height than the original design by 6 metres (46.60 metres compared to the original design of 52.50 metres). The expansion of the stadium added 22,150 new seats, taking the total seating capacity to 71,731, and the standing capacity was expanded by 16,500 to 49,670, taking the total stadium capacity (seated and standing combined) to 121,401 persons. FC Barcelona’s record attendance was set on 5 March 1986 in the European Cup quarter-final against Juventus in front of 120,000 spectators, just 1,401 shy of the stadium’s capacity.

Camp Nou was one of several stadiums used throughout the 1982 World Cup, hosting the inauguration ceremony on 13 June. It also hosted more matches in that tournament than any of the 16 other stadiums used all over Spain, including the opening match, where the traditional opening ceremonies took place (including the releasing of a dove). In front of 95,000, Belgium upset the defending champions Argentina 1–0 in that opening match. It then hosted three round-robin matches between the Soviet Union, Poland, and Belgium, which Poland ended up winning and qualifying from to reach the semi-finals, where they played Italy at the Camp Nou, losing 2–0; Italy went on to win the final match, which was played at Real Madrid’s Santiago Bernabéu Stadium in Madrid.

The stadium’s capacity has varied greatly over the years, opening at 106,146, but growing to 121,401 for the 1982 FIFA World Cup. Apart from hosting Barcelona, Camp Nou is home to the Catalan team. The stadium is frequently used for other football events. The European Cup final between Milan and Steaua București was held on 24 May 1989, with the Italian club winning 4–0. Camp Nou hosted part of the football competition, including the final, in the 1992 Summer Olympics. In preparation for these matches, two additional tiers of seating were installed over the previous roof-line.

Camp Nou underwent little change after 1982, except for the opening of the club museum in 1984. The stadium underwent a facelift in 1993–94, in which the pitch was lowered by 2.5 metres (8 feet), the security gap that separated the lawn from the galleries was removed, and standing room was eliminated in favour of individual seating. A new press box, renovation of the presidential grandstand and boxes, new parking under the main grandstand, and new lighting and sound systems were completed in time for the 1998–99 season. In 1999, UEFA outlawed standing sections in stadiums, and Camp Nou’s capacity settled to its current level. The stadium hosted the 1999 UEFA Champions League Final later that year where Manchester United played Bayern Munich. United won 2–1, coming back from 0–1 down in injury time. During 1998–99, UEFA rated Camp Nou a five-star stadium for its services and functionalities.

In 2000, fans were polled concerning the stadium’s name. Of the 29,102 votes the club received, a total of 19,861 (68.25%) preferred Camp Nou to Estadi del FC Barcelona, and thus the official name was changed to the popular nickname. The facilities now include a memorabilia shop, mini-pitches for training matches, and a chapel for the players. The stadium also houses the second-most visited museum in Catalonia, FC Barcelona Museum, which receives more than 1.2 million visitors per year. On 1 October 2017, Barcelona’s league match against Las Palmas was played in an empty Camp Nou due to political turmoil in the region.

The club issued an international tender to remodel the stadium as a celebration of the stadium’s fiftieth anniversary. The objective was to make the facility an integrated and highly visible urban environment. The club schemed to increase the seating capacity by 13,500, with at least half of the total seating to be under cover. The intention was to make it the third-largest stadium in the world (in terms of seating capacity), after the Indianapolis Motor Speedway in the USA (297,000 capacity), and the Rungnado May Day Stadium in North Korea (114,000 capacity).

On 18 September 2007, the British architect Norman Foster and his company were selected to “restructure” Camp Nou. With an estimated cost of €250 million, the plan included the addition of roughly 6,000 seats for a maximum capacity of 105,000. The FC Barcelona board approved the sale of their former training ground (the Mini Estadi) against significant opposition in order to finance the remodeling. The project was planned to begin in 2009 and to be finished for the 2011–12 season. However, due to the 2008 financial crisis, the sale of the training ground was postponed and likewise the remodeling project. In May 2010, Sandro Rosell, then a candidate for president of FC Barcelona, dismissed the possibility of selling the Mini Estadi, saying it would be indefensible to “sell the crown jewels”, and his election on 30 June 2010 effectively halted the plan to remodel Camp Nou.

In January 2014, Barcelona’s board of directors rejected the option of building a new stadium due to financial constraints and instead opted to remodel the Camp Nou to bring the capacity up to 105,000. The project is expected to run from 2017 to early 2021, with a cost of around £495 million (€600 million), making it one of the most expensive expansions on a per-seat basis. A refined plan was released on 26 May 2015, showing plans to add a canopy over the stands, and showing the plans for seating expansion in greater detail. Construction started in the summer of 2018, and estimated completion won’t be until the start of the 2021-2022 La Liga season.

Camp Nou has been used for various purposes other than football, often hosting major concerts. Pope John Paul II celebrated mass for a congregation of over 121,500 at Camp Nou on 17 November 1982, on the occasion being made an honorary citizen of Barcelona. In 1983, Julio Iglesias played for 60,000 people, in what was described as a “most beautifully orchestrated” concert. Other high-profile performances at Camp Nou include those by Bruce Springsteen on 3 August 1988 during his Tunnel of Love Express Tour; and again on 19 and 20 July 2008 during his Magic Tour. On 9 August 1988, Michael Jackson appeared at the stadium in front of 95,000 fans during his Bad World Tour. On 10 September 1988, a charity concert organised by Amnesty International to support human rights featured, among others, Bruce Springsteen, Sting, Peter Gabriel, Youssou N’Dour, Tracy Chapman, and El Último de la Fila. A concert by the Three Tenors – Josep Carreras, Plácido Domingo and Luciano Pavarotti – was held on 13 July 1997. U2 performed at the stadium three times: the first one was on 7 August 2005 during their Vertigo Tour, in front of a sold out crowd of 81,269 people. The second and the third were on 30 June and 2 July 2009 during their U2 360° Tour, in front of a total crowd of 182,055 people. The encore performance of “I’ll Go Crazy If I Don’t Go Crazy Tonight” from the second 2009 show was filmed for the music video.

On 4 November 2014, Ligue Nationale de Rugby (LNR), which operates France’s professional rugby union leagues, announced that the 2015–16 Top 14 final would be held at the Camp Nou on 24 June 2016. The Top 14 final is traditionally held at the Stade de France in the Paris suburb of Saint-Denis. However, the scheduling of the 2015 Rugby World Cup caused the 2015–16 French season to be shifted by several weeks, in turn causing the Stade de France to be unavailable because it would be a major venue for UEFA Euro 2016. The match ultimately drew a crowd of 99,124, setting a new record for attendance at a domestic rugby union match. On 18 May 2019, the first Super League game was hosted at Camp Nou as Catalans Dragons defeated Wigan Warriors 33-16. This match set the Super League attendance record for a regular season fixture, attracting 31,555 fans. 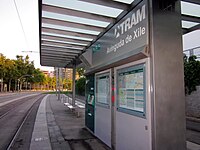 The stadium is accessible from the Barcelona Metro with the closest stations to Camp Nou are Palau Reial, Maria Cristina and Les Corts, on L3; Badal on L5 and Collblanc on L5 or L9 L9. All are 500 to 1,000 metres from Camp Nou, depending on which of the gates (accesses) to Camp Nou are used. Usually metro services are increased when there is a match with significant passenger congestion nonetheless.

Currently a station for Camp Nou is under construction, on L9 and L10.

The bus lines with a stop close to Camp Nou are: TMB lines:

Usually the lines 15, 43 and 56 service is stepped up, depending on the demand that may occur. Apart from that there are two special lines to Mossèn Jacint Verdaguer Square and to Catalunya Square when there are matches.

The stadium is located 13.7 kilometres (8.5 miles) away from the El Prat International Airport which is a 30 or 40 minute drive considering the city’s traffic. It is possible to use the L9 from the airport directly to Collblanc, and walk for about 9–12 minutes to the stadium as an alternative route.

The stadium was one of the venues of the 1982 FIFA World Cup, and held the following matches: