Casa Batlló is a building built in the center of Barcelona. It was designed by Antoni Gaudí, and is considered one of his masterpieces. A remodel of a previously built house, it was redesigned in 1904 by Gaudí and has been refurbished several times after that. Gaudí’s assistants Domènec Sugrañes i Gras, Josep Canaleta and Joan Rubió also contributed to the renovation project.

The local name for the building is Casa dels ossos (House of Bones), as it has a visceral, skeletal organic quality. It is located on the Passeig de Gràcia in the Eixample district, and forms part of a row of houses known as the Illa de la Discòrdia (or Mansana de la Discòrdia, the “Block of Discord”), which consists of four buildings by noted Modernista architects of Barcelona.

Like everything Gaudí designed, Casa Batlló is only identifiable as Modernisme or Art Nouveau in the broadest sense. The ground floor, in particular, has unusual tracery, irregular oval windows and flowing sculpted stone work. There are few straight lines, and much of the façade is decorated with a colorful mosaic made of broken ceramic tiles (trencadís). The roof is arched and was likened to the back of a dragon or dinosaur. A common theory about the building is that the rounded feature to the left of centre, terminating at the top in a turret and cross, represents the lance of Saint George (patron saint of Catalonia, Gaudí’s home), which has been plunged into the back of the dragon. 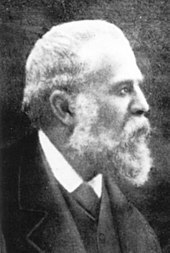 The building that is now Casa Batlló was built in 1877, commissioned by Lluís Sala Sánchez. It was a classical building without remarkable characteristics within the eclecticism traditional by the end of the 19th century. The building had a basement, a ground floor, four other floors and a garden in the back.

The house was bought by Josep Batlló in 1900. The design of the house made the home undesirable to buyers but the Batlló family decided to buy the place due to its centralized location. It is located in the middle of Passeig de Gracia, which in the early 20th century was known as a very prestigious and fashionable area. It was an area where a prestigious family could draw attention to themselves.

In 1906 Josep Batlló still owned the home. The Batlló family was very well known in Barcelona for its contribution to the textile industry in the city. Mr. Josep Batlló I Casanovas was a textile industrialist who owned a few factories in the city. Mr. Batlló married Amalia Godo Belaunzaran, from the family that founded the newspaper La Vanguardia. Josep wanted an architect that would design a house that was like no other and stood out as being audacious and creative. Both Josep and his wife were open to anything and they decided not to limit Gaudí. Josep did not want his house to resemble any of the houses of the rest of the Batlló family, such as Casa Pía, built by the Josep Vilaseca. He chose the architect who had designed Park Güell because he wanted him to come up with a risky plan. The family lived on the Noble Floor of Casa Batlló until the middle of the 1950s.

In 1904 Josep Batlló hired Gaudí to design his home; at first his plans were to tear down the building and construct a completely new house. Gaudí convinced Josep that a renovation was sufficient and was also able to submit the planning application the same year. The building was completed and refurbished in 1906. He completely changed the main apartment which became the residence for the Batlló family. He expanded the central well in order to supply light to the whole building and also added new floors. In the same year the Barcelona City Council selected the house as a candidate for that year’s best building award. The award was given to another architect that year despite Gaudí’s design.

Josep Batlló died in 1934 and the house was kept in order by the wife until her death in 1940 . After the death of the two parents, the house was kept and managed by the children until 1954. In 1954 an insurance company named Seguros Iberia acquired Casa Batlló and set up offices there. In 1970, the first refurbishment occurred mainly in several of the interior rooms of the house. In 1983, the exterior balconies were restored to their original colour and a year later the façade was illuminated during La Mercè festival.

In 1993, the current owners of Casa Batlló bought the home and continued refurbishments throughout the whole building. Two years later, in 1995, Casa Batlló began to hire out its facilities for different events. More than 2,500 square meters of rooms within the building were rented out for many different functions. Due to the building’s location and the beauty of the facilities being rented, the rooms of Casa Batlló were in very high demand and hosted many important events for the city. 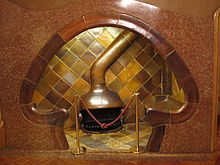 The local name for the building is Casa dels ossos (House of Bones), as it has a visceral, skeletal organic quality. The building looks very remarkable — like everything Gaudí designed, only identifiable as Modernisme or Art Nouveau in the broadest sense. The ground floor, in particular, is rather astonishing with tracery, irregular oval windows and flowing sculpted stone work.

It seems that the goal of the designer was to avoid straight lines completely. Much of the façade is decorated with a mosaic made of broken ceramic tiles (trencadís) that starts in shades of golden orange moving into greenish blues. The roof is arched and was likened to the back of a dragon or dinosaur. A common theory about the building is that the rounded feature to the left of centre, terminating at the top in a turret and cross, represents the lance of Saint George (patron saint of Catalonia, Gaudí’s home), which has been plunged into the back of the dragon. 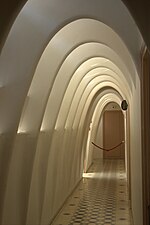 The loft is considered to be one of the most unusual spaces. It was formerly a service area for the tenants of the different apartments in the building which contained laundry rooms and storage areas. It is known for its simplicity of shapes and its Mediterranean influence through the use of white on the walls. It contains a series of sixty catenary arches that creates a space which represents the ribcage of an animal. Some people believe that the “ribcage” design of the arches is a ribcage for the dragon’s spine that is represented in the roof. 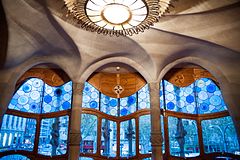 Interior of the Noble Floor

The noble floor is larger than seven-hundred square meters. It is the main floor of the building. The noble floor is accessed through a private entrance hall that utilizes skylights resembling tortoise shells and vaulted walls in curving shapes. On the noble floor, there is a spacious landing with direct views to the blue tiling of the building well. On the Passeig de Gracia side is Mr. Batlló’s study, a dining room, and a secluded spot for courting couples, decorated with a mushroom-shaped fireplace. The elaborate and animal-like décor continues throughout the whole noble floor.

In 2002, the house opened its doors to the public, and people were allowed to visit the noble floor. The building was opened to the public as part of the celebration of the International Year of Gaudí. Casa Batlló met with very much unanticipated success, and visitors became eager to see the rest of the house. Two years later, in celebration of the one hundredth anniversary of the beginning of work on Casa Batlló the fifth floor was restored, and the house extended its visit to the loft and the well. In 2005, Casa Batlló became a Unesco World Heritage Site.

Four chimney stacks on the roof

The roof terrace is one of the most popular features of the entire house due to its famous dragon back design. Gaudí represents an animal’s spine by using tiles of different colors on one side. The roof is decorated with four chimney stacks, that are designed to prevent backdraughts. 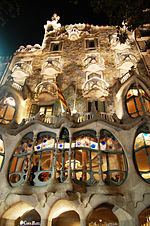 The facade has three distinct sections which are harmoniously integrated. The lower ground floor with the main floor and two first-floor galleries are contained in a structure of Montjuïc sandstone with undulating lines. The central part, which reaches the last floor, is a multicolored section with protruding balconies. The top of the building is a crown, like a huge gable, which is at the same level as the roof and helps to conceal the room where there used to be water tanks. This room is currently empty. The top displays a trim with ceramic pieces that has attracted multiple interpretations. 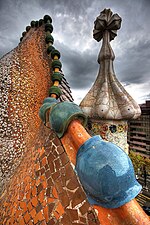 The roof’s arched profile recalls the spine of a dragon with ceramic tiles for scales, and a small triangular window towards the right of the structure simulates the eye. Legend has it that it was once possible to see the Sagrada Familia through this window, which was being built simultaneously. The view of the Sagrada Familia is now blocked from this vantage point by newer buildings. The tiles were given a metallic sheen to simulate the varying scales of the monster, with the color grading from green on the right side, where the head begins, to deep blue and violet in the center, to red and pink on the left side of the building.

One of the highlights of the facade is a tower topped with a cross of four arms oriented to the cardinal directions. It is a bulbous, root-like structure that evokes plant life. There is a second bulb-shaped structure similarly reminiscent of a thalamus flower, which is represented by a cross with arms that are actually buds announcing the next flowering. The tower is decorated with monograms of Jesus (JHS), Maria (M with the ducal crown) and Joseph (JHP), made of ceramic pieces that stand out golden on the green background that covers the facade. These symbols show the deep religiosity of Gaudi, who was inspired by the contemporaneous construction of his basilica to choose the theme of the holy family.

The bulb was broken when it was delivered, perhaps during transportation. Although the manufacturer committed to re-do the broken parts, Gaudí liked the aesthetic of the broken masonry and asked that the pieces be stuck to the main structure with lime mortar and held in with a brass ring. 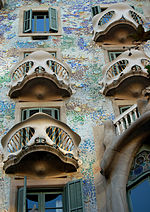 The central part of the facade evokes the surface of a lake with water lilies, reminiscent of Monet‘s Nymphéas, with gentle ripples and reflections caused by the glass and ceramic mosaic. It is a great undulating surface covered with plaster fragments of colored glass discs combined with 330 rounds of polychrome pottery. The discs were designed by Gaudí and Jujol between tests during their stay in Majorca, while working on the restoration of the Cathedral of Palma.

Finally, above the central part of the facade is a smaller balcony, also iron, with a different exterior aesthetic, closer to a local type of lily. Two iron arms were installed here to support a pulley to raise and lower furniture.

The facade of the main floor, made entirely in sandstone, and is supported by two columns. The design is complemented by joinery windows set with multicolored stained glass. In front of the large windows, as if they were pillars that support the complex stone structure, there are six fine columns that seem to simulate the bones of a limb, with an apparent central articulation; in fact, this is a floral decoration. The rounded shapes of the gaps and the lip-like edges carved into the stone surrounding them create a semblance of a fully open mouth, for which the Casa Batlló has been nicknamed the “house of yawns.” The structure repeats on the first floor and in the design of two windows at the ends forming galleries, but on the large central window there are two balconies as described above.

Is this page outdated, incorrect or is something missing?