The Columbus Monument (Catalan: Monument a Colom, IPA: [munuˈment ə kuˈlom]; Spanish: Monumento a Colón or Mirador de Colón) is a 60 m (197 ft) tall monument to Christopher Columbus at the lower end of La Rambla, Barcelona, Catalonia, Spain. It was constructed for the Exposición Universal de Barcelona (1888) in honor of Columbus’ first voyage to the Americas. The monument serves as a reminder that Christopher Columbus reported to Queen Isabella I and King Ferdinand V in Barcelona after his first trip to the new continent. The monument has an elevator that leads to a viewpoint from which you can see the entire center and coastline of the city (click here for more details).

At the very top of the monument stands a 7.2 m (24 ft) tall bronze statue atop a 40 m (131 ft) tall Corinthian column. The statue was sculpted by Rafael Atché and is said to depict Columbus pointing towards the New World with his right hand, while holding a scroll in the left. It is a commonly held belief that instead of pointing to the west towards the New World, the statue points east towards Columbus’s supposed home city of Genoa. This, however, is not true, as the statue points south-southeast (a more southerly direction than the adjacent Rambla Del Mar and almost a perfect extension of the direction of La Rambla, Barcelona) and in effect is pointing at a point somewhere near the city of Constantine, Algeria. To point at Genoa in northern Italy the statue would have to face east-northeast and point up the coastline. It is more likely that the statue is situated in the current way simply to have Columbus point out to sea underscoring his achievements in naval exploration. The statue is atop a socle, on which the word “Tierra” (land) is inscribed. 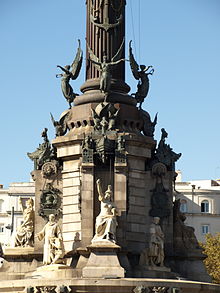 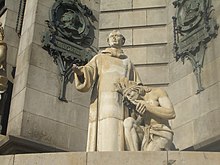 Statue of Father Bernat de Boïl, with the medallions of the Marqués and Marquessa de Moya behind

The column, hung with a device bearing an anchor, stands on an octagonal pedestal from which four bronze winged victories or Phemes take flight towards the four corners of the world, above paired griffins. Four buttresses against the octagonal pedestal bear portrait medallions that depict persons related to Columbus:

Seated against the buttresses are four figures that represent four realms of Spain: the Principality of Catalonia, and the kingdoms of León, Aragon, and Castile.

Against the base of the pedestal between the buttresses are four additional statues:

An elevator inside the column takes visitors up to a viewing platform at the top (just below the socle).

The canted octagonal plinth is inset with eight bronze bas-relief panels that depict important scenes in Columbus’s first voyage to the Americas:

Alternating with the bas-reliefs are eight coats-of-arms representing locations that Columbus visited:

Lion at the base

The base of the monument is a 20 m (66 ft) wide circle, with four staircases. Each staircase is flanked by two lions.

The idea of a monument to Columbus came in 1856 from Antoni Fages i Ferrer, who proposed that it be constructed entirely by Catalans, but he got nowhere with his plan for sixteen years. Finally in 1872 he gained the support of the mayor of the city, Francesc Rius i Taulet, and in 1881 the city passed a resolution to build the monument. A contest was held exclusively for Spanish artists to submit their designs with the winner being Gaietà Buigas i Monravà, a Catalan. Most of the money was privately raised; only twelve percent of it was financed by public funds. All of the funding came from Spanish sources and the entire construction (labour and materials) was done by Catalans. Construction began in 1882 and was completed in 1888 in time for the Exposición Universal de Barcelona.