La Rambla is a street in central Barcelona. A tree-lined pedestrian street, it stretches for 1.2 kilometres (0.75 mi) connecting Plaça de Catalunya in the centre with the Christopher Columbus Monument at Port Vell. La Rambla forms the boundary between the quarters of Barri Gòtic, to the east, and El Raval, to the west. La Rambla can be crowded, especially during the height of the tourist season. Its popularity with tourists has affected the character of the street, with a move to pavement cafes and souvenir kiosks. It has also suffered from the attention of pickpockets. The Spanish poet Federico García Lorca once said that La Rambla was “the only street in the world which I wish would never end.” 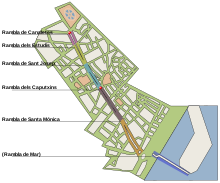 La Rambla can be considered a series of shorter streets, each differently named, hence the plural form Les Rambles (the original Catalan form; in Spanish it is Las Ramblas). The street is successively called:

To the north of La Rambla lies Plaça de Catalunya, a large square in central Barcelona that is generally considered to be both its city centre and the place where the old city and the 19th century-built Eixample meet. To the east of La Rambla is the Barri Gòtic or Gothic Quarter, the centre of the old city of Barcelona. The Barri Gòtic retains a labyrinthine street plan, with small squares and streets, many of which connect onto the Rambla. One of the larger of these squares is the Plaça Reial, a lively 19th century square with tall palm trees and street lamps designed by Antoni Gaudí, which opens down a short entrance passage off the Rambla dels Caputxins. Further into the Barri Gòtic can be found the Cathedral of Santa Eulàlia and the Plaça Sant Jaume that houses the buildings of the Generalitat of Catalonia and Barcelona’s City Council.

To the west of La Rambla is the rather different El Raval quarter. Outside the city’s earliest walls, this area was originally the site of various religious and medical institutions. Later factories grew up along with housing for the workers, whilst the proximity to the port led to the area becoming known for its nightlife and clubs, as well as prostitution and crime. Today the area still retains a degree of ‘edge’, but it also home to several important buildings, including Gaudí’s Palau Güell, which is only a few steps down the Carrer Nou de la Rambla from the Rambla dels Caputxins.

At the southern end of the Rambla is the Christopher Columbus Monument and the Port Vell, the old port of Barcelona, now largely given over to pleasure craft. Near to the port end of the Rambla are the Royal Dockyards (in Catalan, Drassanes), which house a maritime museum specifically devoted to naval history in the Mediterranean. Extensions at either end of the Rambla also carry the name Rambla, but are not normally considered part of La Rambla itself. To the north, the Rambla de Catalunya extends into the Eixample district. To the south, construction of the Maremàgnum in the early 1990s resulted in a continuation of La Rambla on a wooden walkway into the harbour called the Rambla de Mar. 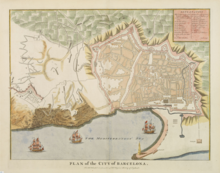 Barcelona around 1700, showing La Rambla running down the centre flanked by the old city wall on its right.

The course of La Rambla was originally a sewage-filled stream, usually dry but an important drain for the heavy rainwater flowing from the Collserola hills during spring and autumn. (Rambla, from the Arabic رمل “sand”, is Catalan for “wadi“. The name of the city of Ramla in Israel is derived from the same origin). It separated the walled city on its north-east bank from the settlements of El Raval (“the suburb”) on its south-west.

In the year 1377, construction started on an extension of the city walls to include La Rambla and El Raval. In 1440, the stream was diverted to run outside the new walls, and La Rambla gradually started turning into a street. Over the next few centuries, La Rambla became established as a centre of Barcelona city life, a long wide thoroughfare used for festivals, markets, and sports. Several large religious establishments were also built along the street during this period. These include the Jesuit Bethlehem monastery and college (1553), of which just the later church remains; the Carmelite St. Joseph’s monastery, on the site of the current Boqueria market; and a Capuchin monastery at the lower end of the street.

In 1703, the first of the trees lining La Rambla were planted. They were 280 birch trees and later on those were replaced by elm trees. In 1832 some acacias were planted and the currently standing plane trees started to be the common tree from 1859.

Various conflicts over recent centuries took their toll on La Rambla’s religious buildings, most notably the St. James’s Night riots in 1835 when revolutionaries burned the monasteries and churches and killed a number of friars; and the Spanish Civil War in 1936-39, when Barcelona came under the control of anarchists who again targeted religious buildings and personnel, as well as being damaged by artillery and air attacks on the area from pro-Franco forces.

Until 2010, the Rambla dels Estudis was the site of an open-air market for caged birds and other small pets. However animal protection laws made it difficult for the market to continue. After years of fighting the legislation, the market was forced to close. On 17 August 2017, many people were struck by a van deliberately driven down the side walk on La Rambla in a terrorist attack, causing 15 deaths and at least 100 injuries. 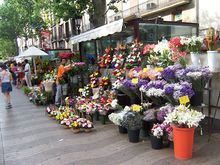 The tree-lined central promenade of La Rambla is crowded during the day and until late in the night. Its origins as a watercourse are reflected in the paving design, which appears to ripple like water. Along the promenade’s length are kiosks that sell newspapers and souvenirs, other kiosks selling flowers, street traders, performers, and pavement cafes and bars. Several notable sights are also located within the promenade, including a mosaic by Joan Miró and the Font de Canaletes, a fountain and popular meeting point.

Along the Rambla are historic buildings as the Palace of the Virreina and the Liceu Theatre (Liceo in Spanish), in which operas and ballets are staged. The La Boqueria market opens off the Rambla and is one of the city’s foremost tourist landmarks, housing a very diverse selection of goods. One of the side streets, only a few metres long, leads to the Royal Square (Plaça Reial), a plaza with palm trees and porticoed buildings containing many pubs and restaurants and in which stamp and coin collectors gather on the weekends.

The Rambla is the location for several of Barcelona’s cultural establishments, including:

In the Pla de l’Os can be found a pavement mosaic created in 1971 by the famed artist Joan Miró.

Line L3 of the Barcelona Metro runs beneath the length of La Rambla, with stations at:

Is this page outdated, incorrect or is something missing?